Deprecated: Methods with the same name as their class will not be constructors in a future version of PHP; acm has a deprecated constructor in /www/htdocs/w0097c3c/rs-forum/phpBB3/includes/acm/acm_file.php on line 23

Deprecated: Methods with the same name as their class will not be constructors in a future version of PHP; user has a deprecated constructor in /www/htdocs/w0097c3c/rs-forum/phpBB3/includes/session.php on line 1439

Deprecated: Methods with the same name as their class will not be constructors in a future version of PHP; bitfield has a deprecated constructor in /www/htdocs/w0097c3c/rs-forum/phpBB3/includes/functions_content.php on line 1256

Deprecated: Methods with the same name as their class will not be constructors in a future version of PHP; dbal has a deprecated constructor in /www/htdocs/w0097c3c/rs-forum/phpBB3/includes/db/dbal.php on line 23

Deprecated: Methods with the same name as their class will not be constructors in a future version of PHP; phpbb_hook has a deprecated constructor in /www/htdocs/w0097c3c/rs-forum/phpBB3/includes/hooks/index.php on line 23

The animation challenge will end friday, Dec 01, 2006 - 00:00 AM. Please read the Informations for the Blue-Guy-Long-Jump-Animation-Challenge!

it's lots of fun animating the blue guy. Now he also greets the audience. I've done a first camera morphing but this has to be more subtle next time. Also the guy needs a bit more work at the walk sequence.
Just have a look at my next wip (MS-MPEG4 V3 - 1,9MB):

Update of the update:

I think I was able to improve the walk and also the camera morphing. That's it for this first test sequence. Might be the intro of the final long-jump-animation. Looks good Boris! I'll see what I can do with the Blue Guy

Hi Boris, yes it looks very good. How did you anchor the foot on the ground with foot steps ?

Hi Robert and Stefan,
thanks for your comments!
I didn't used the footsteps tool. I never got a character walking with it

So I tried the drag tool which was introduced in Version 5. The drag tool simulates the gravity of the floor. If you bind the character and its skeleton via drag tool to the floor the character and skeleton will be sort of anchored to the floor because of the gravity. That doesn't eliminate automatically any slipping but it assists it very much if you setup the walk quite carefully. Setting up the keyframes I use 5 frames steps. I grab the spine of the blue guy and move it forward till it starts to pull the legs after it a bit. After this I take the walking leg and put it to a new suiting position. The standing leg shouldn't be moved at all at the feet. Very helpfull is here to work with gridsnapping and grid to control that the foot stays where it is. Some movement in the knee of the standing leg makes it look less stiff.
I hope that I was able to explain this right with my poor english. If not ... please tell me and I'll make a little animation showing how I setup the keyframes.

Juha explained on the betalist how to use the drag tool to bind the character and the skeleton to the drag floor:

- create a level containing an animated
body (both the skeleton and the mesh).

- create a drag tool consisting of a rectangle
representing the floor.

- click the 'Bind' tool of the drag tool, to bind
it to the level.

Just one thing: there was an undo bug for this method which is eliminated in SP3 which will be released today or in very near future

Here is a screenshot of my drag tool setup:

RE: his first jump 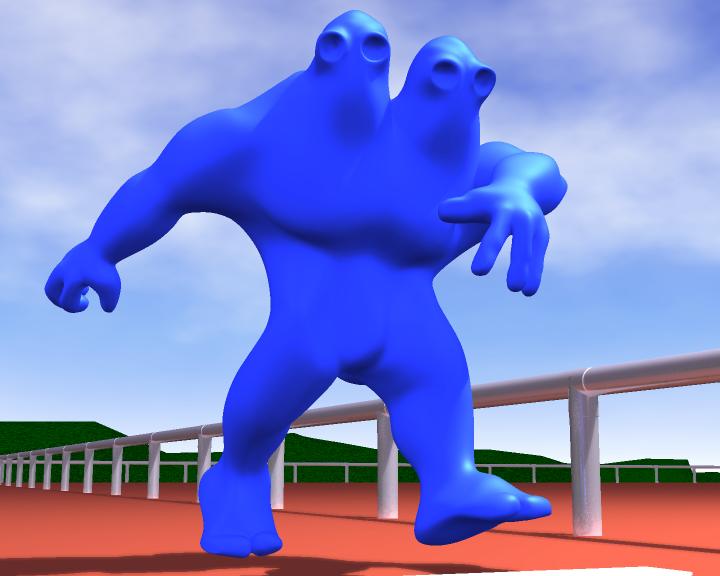 that's the final animation for the challenge:

It's not complete. He doesn't greet at the end but he did it before in the wip ... so don't consider him as unfriendly

I'll render this animation again with the next beta of DynAtomic (wobbling) and then I'll add an end.
It was the first time I really did a walksequence. I think the drag tool gives you a real good base to make interesting walks of all sorts without slipping and penetrating the floor. One has to get a feeling for it.

Users browsing this forum: No registered users and 1 guest